An all-in-one solution to creating an electronic ‘Choose Your Own Adventure’ game book.

The project is separated into two parts: Story Maker Website and Story Viewer.

Story Maker Website:
A story maker tool that allows you to create dynamic multimedia stories with different endings.
The website uses React for Front-End and Rails for Back-End (including APIs).

Story Viewer:
For now, our story viewer is only available for the WeChat MiniProgram platform. 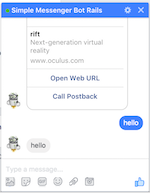 This bot is a Ruby on Rails version of the Simple Echo Bot from the Facebook Messenger Platform Quick Start guide. It has the same features as the node.js version (plain text, generic message and postback).

Implemented the game interface with React. The code for the game logic is take from: https://github.com/inimino/js-intro-exercises/tree/master/lib

Keyboard arrow keys or use the built-in keypad.

Helping kids learn the laws of physics while having fun playing with our mixed reality HoloLens application.

Users can construct their own world by using our built-in models, add force to objects and see how objects react.

How we built it

Holo-Phyperiment was developed in C# using Unity3D during HACKPKU 2017 (Peking University Hackathon). We use the “HoloToolKit for Unity” Package to ease the development. We first started off by brainstorming the key features of what a physics experiment application should have. After having a clear idea of what we will be building, we watched tutorials on Unity3d development for the HoloLens on Microsoft’s HoloLens Academy website, seeking for features given by HoloLens that could be use in our application to enhance a rich mixed reality experience. Three main features we used were Gaze, Gesture and Voice Recognition.

Accomplishments that we’re proud of

We managed to create key features of what a physics experiment application should have.